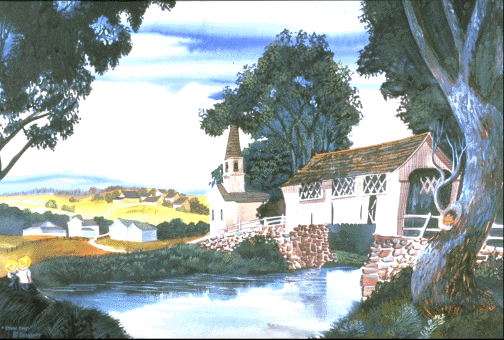 Some years ago my husband and I traveled to Minnesota to pick up our college-aged daughter from a Lutheran camp (where she had been a camp counselor). While we were in the area, we stopped and spent the night with one of my husband’s friends from Vietnam. I’d only met Chuck and his wife Judy once before when they had visited us in St. Louis with their two young children.

While Chad and Chuck visited in the family room, I went into the kitchen with Judy as she began to prepare dinner. She began telling me about her sister and extended family. “Kay, I came from a large family and have 12 brothers and sisters. We never attended church.”

“My mom told me my younger sister was very depressed. No one seemed to know why. I came to know Christ as my Savior some years ago and wanted to witness about Christ to my sister. My family was planning a family reunion. I traveled by train to see them. On the way there I prayed that God would give me the words to share my faith in Christ with all of them, but especially that He would give me words to share my faith with my sister. But, the time never seemed appropriate. It didn’t happen.”

“On the train ride home, I continued to pray about my desire to do this. After praying, I had the thought come into my mind that I should tell my sister about my abortion.” (Note to reader: remember I was listening to Judy and knew nothing about her having an abortion. What did I do? I kept listening.) She continued, “I thought, that is not going to happen. I have never told anyone about the abortion. I never told my mom or dad, or any of my brothers or sisters. So, although I kept thinking and praying about this idea, I didn’t do it. But, Kay, I continued to feel like I should tell my sister about my abortion. I reasoned with myself, she is depressed—how is telling her about my abortion over ten years ago going to help her? It won’t help.”

“So I put the idea aside for several more days—but the desire to tell her just kept coming to my mind. I couldn’t understand it, but finally I decided I would write her. I’d tell her about my abortion and my faith in Christ. I sat down and wrote her a long letter. I told her that years before I had an abortion—and afterward felt terrible. Then I told her that a few years after my abortion a woman I knew told me about Jesus—that He had suffered and died for my sins—all of them! This woman never knew I had had an abortion. I didn’t tell her about that sin! But, after hearing of His suffering and death on the cross for me, I placed my faith in Him. I knew I was a sinner. I accepted His forgiveness. Then I began attending a Bible study and later a church. I came to understand that He had died for all my sins, even the sin of killing my own child.”

“The letter I wrote to my sister was ten pages long. I prayed again, put stamps on it and then mailed it. Four days later I got a telephone call from my sister. I finally understood why God had wanted me to tell her about my abortion. My sister told me that she had had an abortion, too. That was why she was so depressed.”

As Judy told me this story that day she said, “My sister still hasn’t placed her faith in Christ, but she asks me questions every time we talk. My husband and I continue to pray that she will come to know Christ.”

Judy told me she had never shared her abortion story publicly. But after our conversation she began sharing her story with small women’s groups at her congregation. She found that as she shared her story, she would almost always have someone come up to her afterward, often privately, and let her know that they too had had an abortion.

Prayer is vital as we share information about life because God answers prayer. I love to pray and often teach about prayer. I was privileged to lead the Lutherans For Life Prayer Breakfast at the most recent LFL national conference in Chicago. I designed a prayer breakfast PowerPoint presentation that I would love to share with LFL state presidents, Renewal For Life® pastors and volunteers, and LFL chapter leaders. Hopefully you can use it to lead a similar prayer breakfast with your LFL chapter, Life Team, small group, or congregation. To obtain a copy, contact me at kmeyer@lutheransforlife.org.

Many of you who read this publication are actively involved in Lutherans For Life as volunteers. Remember that you could be the woman who shared Christ with Judy. She never told that woman about her abortion. But, learning that Christ had forgiven her changed her life and the life of her entire family. Because of you, LFL is making a difference in today’s world. Thank you for caring about individuals and their families and being an LFL volunteer.

Others who read this publication are not able to be volunteers. But, you support LFL with your prayers and financial gifts. “Every man shall give as he is able, according to the blessing of the Lord your God that he has given you” (Deuteronomy 16:17).

Because of your gifts to Lutherans For Life you are making a difference in the lives of women who have had an abortion, teenagers who are pregnant and feel hopeless, those who have children with special needs, and those who are shut-ins or on hospice.

You help LFL accomplish the mission: to equip Lutherans to be Gospel-motivated voices for Life. Your prayers and financial support allow us to impact lives through the Gospel of Christ.

Thank you for your volunteer work, your prayers, and your financial support. Join us in praying that the Lord will continue to bless LFL today and tomorrow.