For Life Live – This Is Not Your Grandma’s Pro-Life Fight! 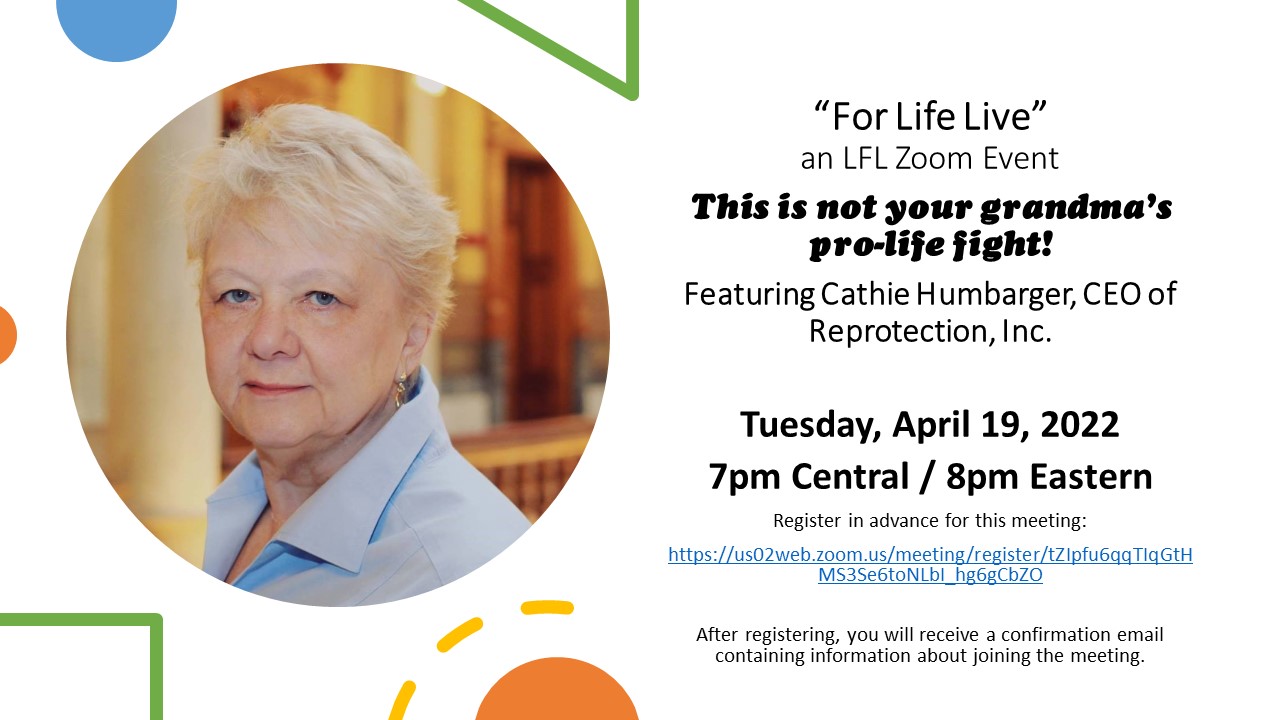 During this edition of For Life Live we will:

Cathie Humbarger was born in Columbus, Indiana—the fourth of four children. She was baptized and brought up in the Lutheran faith. She was confirmed at St. Peter’s Lutheran Church in Columbus and graduated from Columbus High School in 1966. When she married her husband, Rick, she moved to Fort Wayne, Indiana, and continued her career in banking. One of the blessings of living near Concordia Seminary was hosting many students and wives for a day, a week, or a month. Rick and Cathie are the parents of three children, who have blessed them with fourteen grandchildren and two great-grandchildren.

Cathie became active in the pro-life fight over 40 years ago, when a friend shared her abortion experience with her. She was blessed to walk with her friend through the healing process. Cathie was also privileged to serve on the founding board of A Hope Center, the first pregnancy resource center in Fort Wayne, Indiana. Her passion over the years is to save as many babies and mothers as possible from abortions, remembering that the Lord reached her through the broken heart of a young woman who chose abortion in her crisis pregnancy.

In her role as vice president of policy enforcement for Indiana Right to Life, she organized a team of county affiliates, in locations where abortionist Ulrich Klopfer operated, to enforce administrative code and laws resulting in the closure of three abortion facilities in Indiana. This expanded into a statewide coalition to gather evidence, file complaints, and provide information to authorities resulting in disciplinary action against three abortionists, and the indefinite suspension of the medical license of an abortionist responsible for over 50,000 abortions.

Cathie also served 20 years as the executive director of Right to Life of Northeast Indiana (formerly Allen County Right to Life). In that role, she led programs to prepare students and young adults to be gracious and persuasive advocates for life, closed the local abortion business, led activists to prevent an abortion business from reopening and was a voice for the unborn in the political arena advocating for innocent unborn boys and girls and their mothers in the Indiana Statehouse.

She founded the long running radio program, “I Choose Life News & Views,” a weekly 30-minute radio program focusing on life issues. The program has aired on several stations for over 15 years.

In January of 2020, Cathie was named CEO of Reprotection, Inc. and was charged with the mission to make our nation abortion-free by closing abortion businesses one at a time. Reprotection follows the strategy she used in Indiana to hold abortionists accountable and close dangerous abortion businesses. She is the founder and director of public policy.