For Life Live – Procreation: The First Blessing, Purpose, and Command 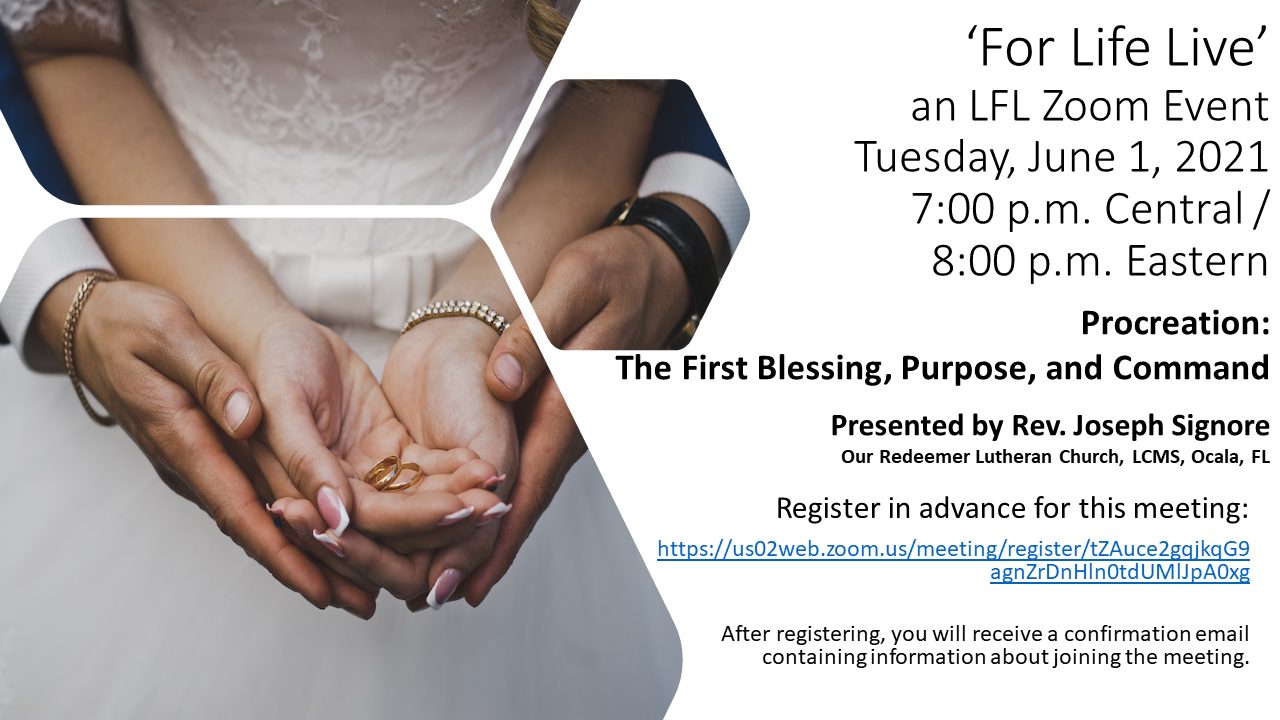 Deciding to have or not have (more) children is a conversation that too often centers on the desires and devices of the couple. But what if we begin the discussion instead with God’s purpose and plan?

Procreation: the First Blessing:
Procreation is a blessing, not a burden. In the very beginning, God made man (male and female) in his image and blessed them to be co-creators with him. It’s in man’s nature to reflect the creativity of God. From buildings and bridges to symphonies and sculptures, man desires to make things that are good and beautiful. But there is no bigger or better way that man mirrors the Creator than procreating children according to God’s design and training them up in the will of God. Imagine that amazing invitation that God gives husbands and wives to join him in his ongoing and eternal work of creation! Fallen human nature tries to be “like God” in ways God has forbidden. That always and only leads to disastrous results. But through godly procreation, man and woman actually become like God in the original way God intended: creating more people in his (and our!) image to join in exercising rightful dominion over all creation.

Procreation: the First Purpose of Marriage:
Procreation is a primary purpose, not an optional add-on for marriage. Genesis gives two primary purposes for marriage: procreation (chapter 1) and love union (chapter 2). The two creation accounts complement, not compete against, each other. So, Christians are to similarly elevate equally the two original purposes of marriage. However, procreation is commonly pushed to the backseat while “love” drives the marriage. But biblically, procreation and love union go hand-in-hand, naturally joined in the one-flesh embrace of husband and wife. Sadly, when church and state no longer see procreation as essential to the meaning of marriage, the door is opened to all manner of deviations and devaluations of sexuality and life.

Procreation: the First Command:
While emphasizing that procreation is a blessing, we also need to be clear that the Bible also speaks of it as a command. In fact, it is the first command God gives, and it’s the only command given pre-Fall that remains in effect post-Fall. This command is explicitly given at creation and immediately after the Flood. However, the force of the command is seen throughout the Old Testament. The New Testament does offer an alternative to marriage (celibacy). It also infuses marriage with additional meaning (represents the relationship between Christ and the church). Even so, it does not repeal procreation as the first blessing, purpose, and command. God restores, not replaces, his good creation.

The Rev. Joseph D. Signore III received a B.A. in theology and theological languages from Concordia University Chicago in 2008. He was formed for pastoral ministry at Concordia Seminary in St. Louis, Missouri and graduated with an M.Div. in 2013. He was the pastor of St. Paul’s Lutheran Church in Pomona, California, for the next five years. In 2018 he was called to Our Redeemer Lutheran Church in Ocala, Florida, and has been their pastor to this day. His hobby is to research, write, and speak on the ethics of contraception. He is married to Anna. Their children include Danny (5), Titus (nearly 3), and Julia due soon to be born.