For Life Live – Faith in the Halls of Power 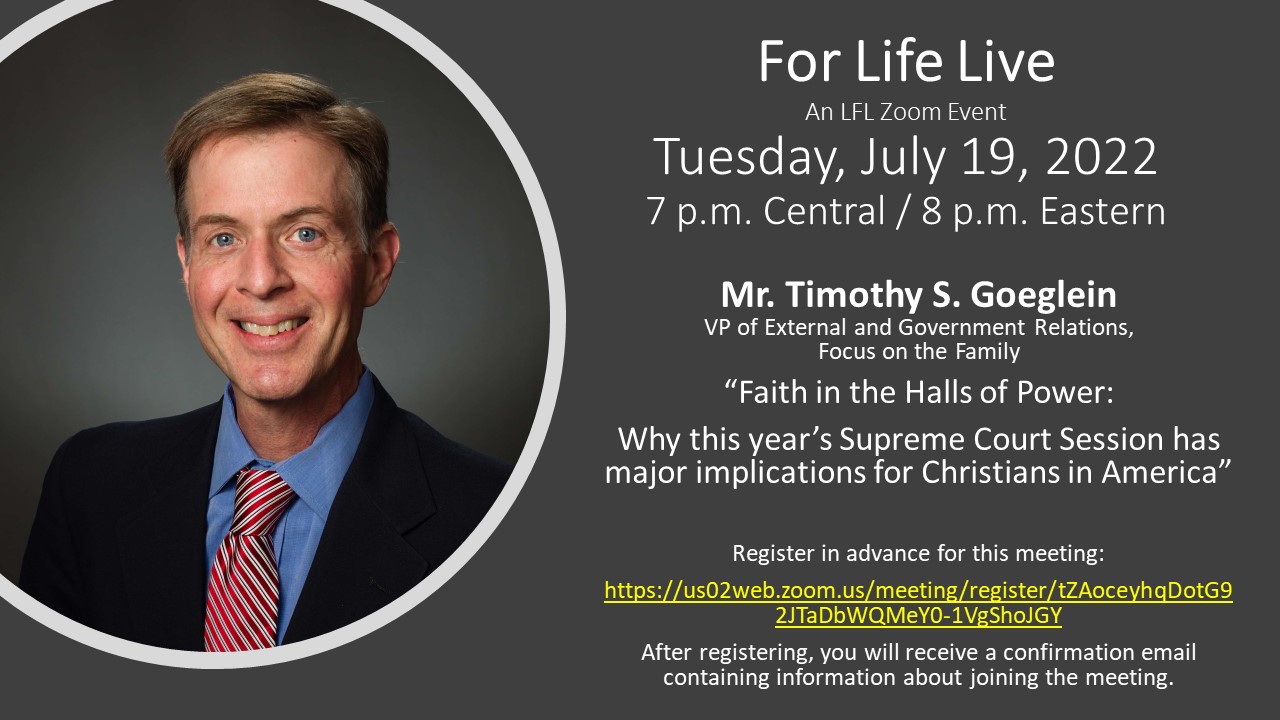 For Life Live – Faith in the Halls of Power: Why this year’s Supreme Court Session has major implications for Christians in America

Our Guest: Mr. Timothy S. Goeglein – VP of External and Government Relations, Focus on the Family

Timothy S. Goeglein, who is the vice president of external and government relations at Focus on the Family in Washington D.C., will speak about Faith in the Halls of Power: Why this year’s Supreme Court session has major implications for Christians in America. Tim will review the Dobbs decision. He will also discuss the four major religious liberty/rights of conscience cases from this term, including a foundational case involving a high school football coach who was fired for praying. These and other key cases have made this court term one of the most impactful on Americans of faith in the last half-century. Tim is a lifelong Lutheran and a member of Immanuel Lutheran Church in Alexandria, Virginia, where he is a deacon. Tim worked in the United States for a decade and at the White House for nearly eight years.

Tim Goeglein champions God’s welcomed role in the public square. His years of public service and private initiative have been devoted to faith, freedom, and family.

Tim is the Vice President for External and Government Relations at Focus on the Family in Washington. He served in high-level government posts for the past two decades. He worked as Special Assistant to President George W. Bush, where he was the Deputy Director of the White House Office of Public Liaison from 2001 to 2008. He was the President’s principal outreach contact for conservatives, think tanks, veteran’s groups, faith-based groups, and some of America’s leading cultural organizations. He was a member of the President’s original 2000 campaign and White House staff, serving for nearly eight years. Also, he has served as a senior fellow at The Heritage Foundation.

Goeglein is the author of the political memoir, The Man in the Middle: Faith and Politics in the George W. Bush Era, which was published in September 2011. His latest book is American Restoration: How Faith, Family, and Personal Sacrifice Can Heal Our Nation (Regnery 2019), in which he offers a roadmap to national and spiritual renewal by examining American culture.

From 1988 through 1998, Tim was first the Deputy Press Secretary, followed by Press Secretary and Communications Director for U.S. Senator Dan Coats of Indiana (who was in the Senate for a decade). Between his time with the Senate and Bush campaign, Tim served as Communications Director for Gary Bauer at the Campaign for Working Families and in the Bauer presidential bid.

Tim was an intern for then-U.S. Senator Dan Quayle in 1985, and for then-Representative Dan Coats and for NBC News in 1986 during his college years at Indiana University’s Ernie Pyle School of Journalism. When he graduated in 1986, he was the Richard Gray Fellow in his senior year.

Tim’s first job upon graduation was as a television news producer for the NBC affiliate in his hometown of Fort Wayne, Indiana. During high school and college, he produced a show for WOWO Radio, then owned by the Westinghouse Broadcasting Corporation. The program was heard in 28 states.

Tim is the secretary of the Coalitions for America Board, a member of the board for the National Civic Art Society, and a member of the board of governors of the Young America’s Foundation which owns and operates the Ronald Reagan Ranch in Santa Barbara, California. Tim also serves on the Institute for American Universities Advisory Board. Goeglein served as Board Secretary of the American Conservative Union Foundation, and five years as a Senior Fellow at The Heritage Foundation. Also, he is a member of the Council for National Policy, the Philadelphia Society, and the Capitol Hill Club.

Tim serves on the Sanctity of Life Commission for his church body, the 2.5 million-member Lutheran Church-Missouri Synod, and has served as a deacon in his church for 30 years. His hobbies include reading, tennis, swimming, biking, and the fine arts. He is married to Jenny, and they have two sons.