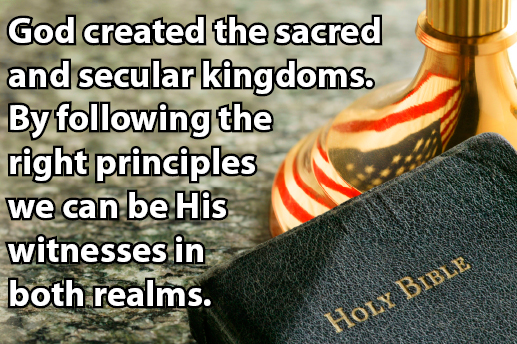 As we endeavor to be good citizens and effective advocates for life, we often fail to consider the distinctively Lutheran contribution to church-state relations. Most of us vaguely recall that Luther distinguished the Kingdom of the Right (the Church) from the Kingdom of the Left (the State). But we tend to forget the significance of that distinction, and sometimes we fall into the errors and misinterpretations of later Lutherans. Each of these kingdoms has its own role: “the one to produce piety, the other to create external peace and to prevent evil deeds. Neither is sufficient in the world without the other.” (1) These two kingdoms complement each other. By preserving law and order, the State makes it easier for the Church to evangelize and teach. By teaching godly virtue and moral character, the Church makes it easier for the State to govern. Biblically-informed Christians are the easiest people in the world to govern—and the hardest people in the world to tyrannize.

What did Luther really believe about the Bible, law, and politics?

But Luther never meant to say that reason and revelation are mutually exclusive tools. They can’t be, because both are based on God’s truth. The Scriptures themselves contain appeals to logic and to evidence. And when a pastor expounds the Word, he not only proclaims it, he uses reason and evidence to interpret and apply it.

Nor did he divorce the Word from civil government. He did believe in natural law, but natural law overlaps with Scripture: natural law is the Ten Commandments. It is written in the heart of every human being by Creation. It was clearly and comprehensively put on Mount Sinai, finer indeed than any philosopher has ever stated it. “Natural law, then, is created and written in the heart; it does not come from men but is a created Law to which everyone who hears it cannot but consent.” (2)

However, only some of the Mosaic Law is binding today. The moral law is universally binding in all societies at all times in history, but other portions of the Old Testament Law are implementing legislation for Israel. Some of these laws may serve as good examples for other societies to follow (Deuteronomy 4:5-8), but they are binding only on Israel. Luther spoke of natural law (gesetz) and natural justice (recht), and much of the Mosaic Law is universal natural law and justice. But other portions of the Mosaic Law are Sachsenspiegal, laws unique to Israel that are no more binding on us than the laws of France are binding in Germany. (3)

Luther equated natural law with the principles of the old Teutonic common law held by the Saxons of Northern Germany. Much of Southern Germany had been conquered by the Romans and had come under the influence of Roman law, but Northern Germany and Scandinavia still held to the old common law. Luther had studied law, and he shared the concern of northern common-law lawyers that the Holy Roman Empire and the Roman Catholic Church were trying to impose Roman law and Canon Law on the northern electorates. In December 1520, when Luther stood outside the gates of Wittenberg and burned the papal bull of excommunication, he also burned a complete set of the Roman Catholic Canon Law. The Canon Law, he believed, was in many respects at variance with Scripture, and just as important, God had delegated the function of laws and courts to the Kingdom of the Left, not the Kingdom of the Right. As he grew older, Luther softened his opposition to the Canon Law, saying that common law lawyers could benefit from the scholarly learning that Canon Law priests had developed and passed on through the ages.

Luther is often quoted (and misquoted) as preferring a prudent but bad ruler to a good but imprudent one. Here’s what he actually said:

The reasonable question has been put whether it is better to have a good but imprudent ruler or a prudent but personally bad one. Moses here certainly calls for both: a good ruler and a prudent ruler. However, if both qualifications cannot be had, a prudent ruler who is not personally good is better than a good one who is not prudent, because a good one rules nothing but is only ruled—and only by the worst of people. Even though a prudent but personally bad ruler may harm the good people, he nevertheless rules the evil ones at the same time; and this is more necessary and proper for the world, since the world is nothing but a mass of evil people. (4)

Notwithstanding, Luther’s ideal is the godly Christian prince: “A prince must also act in a Christian way toward God, that is, he must subject himself to Him in entire confidence and pray for wisdom to rule well, as Solomon did.” However, “To be qualified to rule, it is not enough to be pious. A jackass is also pious. Ability and experience are required in order to rule. One may find a pious person who can hardly count to five. He who is to rule dare not lack reason, prudence, wit, and wisdom if he does not want to work great harm in his government; for government is subject to reason.” (5)

The ideal ruler, like the ideal pastor, combines good Christian character and knowledge of the Word with wisdom and common sense.

As Christians, then, we can formulate our convictions about an issue like abortion by looking to the Bible and seeing what God’s Word says about the sanctity of life and when human life begins. But when we enter the political arena, such as a political party convention or a legislative hearing, we need to be prepared to articulate our convictions in secular terms and backed by solid medical and scientific evidence. That way, even those who don’t care about the Bible will have to deal with the truth of our position.

God created the sacred and secular kingdoms. By following these principles we can be His witnesses in both realms.