To Save a Life 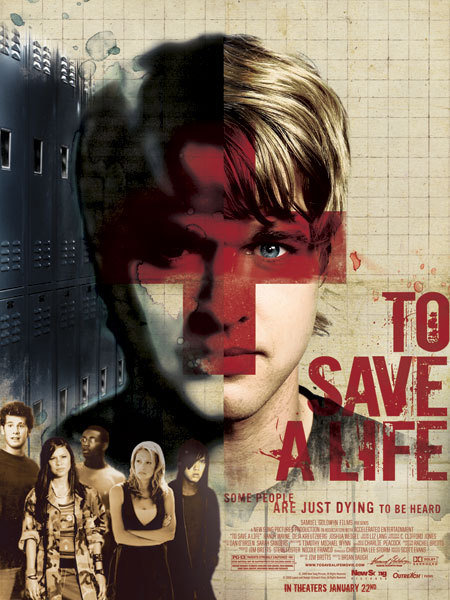 This verse of Scripture has been a treasure in our humble attempt at Christian parenting through the years, as this was often the “plumb line” when deciding what kind of media was allowed entrance into our home.

One of those media items was the film To Save A Life (tosavealifemovie.com).

Jake (Randy Wayne) has it all: he is good-looking, super popular, a high school basketball star and everyone’s hero; his girlfriend, Amy (Deja Kreutzberg), is the homecoming queen and all around “hottie.” Jake has the seemingly “perfect future” all planned out for himself—complete with a college basketball scholarship offer to Louisville which had been his life-long dream.

Jake’s life was perfect until Jake’s forgotten boyhood best friend, Roger Dawson (Robert Bailey), committed suicide right before his eyes on the high school campus. To Save a Life opens at the graveside ceremony of his friend Roger.

Social politics of high school slowly pulled the boys apart. It seems Jake has everything and Roger has nothing—no friends, no hope, nothing but rejection. Roger doesn’t seem to belong in Jake’s—or anyone’s—circle of friends, and he’d had enough. He walks onto campus with a gun in his pocket and pain in his heart and makes a tragic move. Jake’s last-ditch effort doesn’t stop Roger, and it rocks Jake’s world.

Jake, distraught and looking for reasons for Roger’s suicide, is devastated about what he himself did not do. “Could I have saved him?” Jake’s feelings of guilt set him on a quest for answers. A compassionate stranger enters his life and offers hope from an odd place—a relationship with God. Would Jake be willing to forsake his popularity and his dreams to follow after truth? The repercussions of his decisions from that point on is the roller-coaster ride that becomes the rest of the film—a portrait of real life, believable from beginning to end.

Many people who work with youth will tell you that a huge influence in their lives is “the movies.” According to Jim Britts, a youth pastor and writer of To Save A Life, “I work with troubled teens every day and see the severity of the poor choices they make. Movies are a powerful way to illustrate the consequences of making the wrong choice while reinforcing positive actions.”

To Save A Life was born from a passion to reach young people with the love and security they so desperately need. Teens, young adults, and, yes, adults, are hurting and facing challenges like never before, many that are very much life-threatening. For example, according to the American Psychological Association, in the United States suicide rates have increased by 33% from 1999 through 2017. Suicide ranks as the second leading cause of death for 10- to 34-year-olds and is the fourth leading cause of death for people ages 35 to 54. Suicide is the tenth leading cause of death overall (www.apa.org/monitor/2019/03/trends-suicide).

To Save A Life does not shy away from tough topics and serves as a springboard into a plethora of life-issues discussions: depression and suicide, teen sex and unplanned pregnancy, peer pressure, drug and alcohol use, bullying, divorce, relationships, and intense feelings like loneliness, rejection, frustration, stress, and the need to appear in control during times of personal pain and strife.

To Save A Life is rated PG-13, but this film can help parents, pastors, counselors, youth workers, and others point those struggling with life issues to a way out of their problems by following God’s instructions. This film is life-affirming in numerous ways and, in my humble opinion, a useful tool for “equipping Lutherans to be Gospel-motivated voices For Life.” My family had some lively educational discussions together after viewing this movie.