The “Not So Invisible” Michael Luna 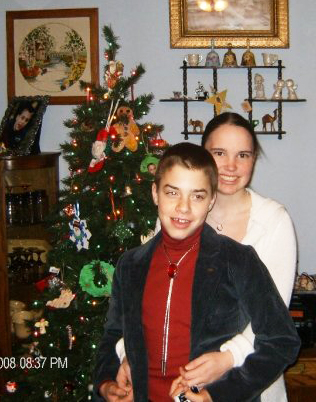 by Rev. Jeff Duncan, Director of Mission and Ministry

“While we have come a long way in improving the living conditions of a developmentally disabled adult, slowly society is becoming more accepting of them, but there is always room for improvement. There are times I can tell you that Jeff and I were so frustrated and so exhausted that we would ask ourselves, ‘Why did we do this?’ It did present a problem … he took up a lot of our time.”

Marcie and Jeff Luna adopted Michael Ray Luna at 18-months out of the foster care system. Michael, now 26, lives, learns, and works in a neighborhood residential facility (Life Works) for those with intellectual development disabilities/mental illness in Wichita, Kansas. Their Facebook page indicates they “believe in true Christian principles and values, BEING valued, respected, AND successful contributors to our community. We are productive members who are positive about ourselves, and we will not be accepted for less than who we are.” This might not have been Michael’s future. 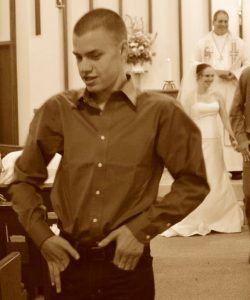 Born September 30, 1994, at 27-weeks’ gestation, Michael was born to a mother who struggled with alcohol and drug addiction, homelessness, and mental disorders. She tried to self-abort Michael with a coat hanger. Found bleeding in an abandoned building, she was rushed to local St. Francis Hospital. There Michael was delivered. He spent over three months in the NICU. No one gave him more than one year of life expectancy. To his birth mother, Michael remained invisible. We pray she received needed help and support as she relinquished custody of Michael with these words: “Take that thing away from me! I don’t want to have anything to do with it.” But God did and He provided this ward of the state life in foster care.

Phil and Marilyn Ward, Michael’s foster family, were also members of St. Andrews Lutheran Church. The Wards knew of the Lunas desire to adopt a second child. (Carrie was adopted first.) They also knew the Luna struggle through three failed adoption attempts. One day after choir practice Marcie heard a voice in her head: “You have to give that little boy a home!” The voice of an angel or the Holy Spirit? Only this is certain—the once invisible boy with a troubled start would now have a forever home!

It was not easy. Michael suffered an immune compromised system, respiratory struggles, and apnea. He experienced seizures, had a lazy eye, and needed physical therapy and a walker for a gait problem (which he hated). Michael also hated (and threw off) glasses. Eventually, between ages two and three, Michael received surgery for the eye, and his infected tonsils/adenoids were removed. With a clean bill of health came the early childhood development diagnosis of mental retardation (a defunct term) at age five. Thankfully, his teacher suggested an autism specialist. Michael was diagnosed and placed in special education integration classes. There Michael thrived through high school. Now a graduate, he will always be intellectually behind, functioning at about a third or fourth grade level. 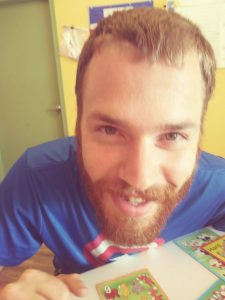 The once “wished to be invisible boy” is now an indispensable part of his family, his church, and his community. Michael teaches his family how to get “used to being around special needs adults.” When Carrie’s children go with Marcie to Life Works, they “go and see children and adults with disabilities, and they are OK with it … more accepting than even my [Marcie’s] generation was because they have been exposed to it so early.”

For her church’s part, Marcie says, “I think if you had a church that knew they were going to have a family … that has a special needs child or disabled adult, that they need to make those people feel comfortable … to accept their family member as an important person instead of demeaning them, ignoring them, (or) being cold toward them.” The Lunas found that acceptance and inclusion through a core group of individuals at St. Andrews. Though they feared Michael “acting out” (and he did), Marcie says, “I got really nervous! That takes a lot of courage to be able to continually come back!”

As for community, Michael shines with his gift of empathy. He senses when staff or residents are sad or having a bad day. He has his own ministry of presence—coming over and sitting quietly, offering hugs, and smiling his big, toothy smiles of appreciation and acceptance of everyone! Thanks be to God for His indispensable creation of Michael, who is never invisible to the heavenly hosts!