Speaking of the Inconceivable – A Closer Look at Suicide’s Stigma 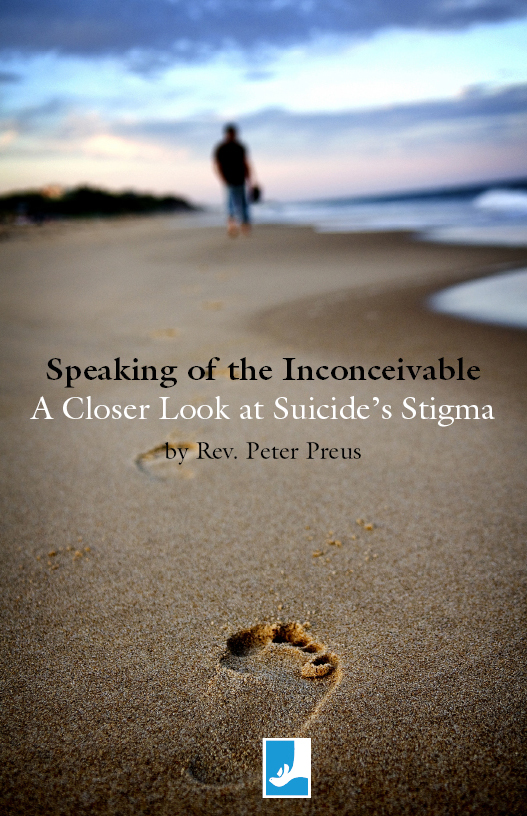 When my wife took her life, I wasn’t as straightforward as I might be. I’d rather say something about her depression than mention that disturbing word that starts with an “s.” I was affected in a major way by suicide’s stigma. Most people regard suicide as inconceivable. “How could he do such a thing?” they ask. The stigma of suicide does not operate by a sense of understanding or compassion. Rather it targets those who have committed suicide and those who have had thoughts of suicide.

Speaking of Suicide (An Inconceivable Death)
Like other stigmas, suicide’s stigma is created largely by fear. People hear the news of a suicide and they conclude, “No way could this happen in my family!” They determine they’re safe if they can judge that something was very off about this person. “He must have been mad … from a dysfunctional family … a bad person!” Suicide’s stigma is also created out of ignorance. Lacking an understanding of depression and mental illness, people object, “So, he was suffering from a bad case of the blues! That’s no excuse for killing yourself!” The uninformed believe they have the right to judge an individual for his inconceivable act, knowing little about the circumstances leading up to his death. Nowhere is such condemnation more severe, perhaps, than among those in the Church. “I doubt very much this person was a Christian! Why else would he commit the unforgivable sin? I think his faith was weak and he fell away! He wasn’t trusting God to get him through his difficulties!”

The truth is his suicide had nothing to do with “the blues.” He was suffering from a chronic case of hopelessness. He wasn’t crazy. He was ill. He wasn’t merely weak. He was in pain. It’s not that he lost his faith. He lost hope. Yes, he was a sinner. But he was also forgiven.

Speaking of Hopelessness (An Inconceivable Motive)
How do you relate with one who determines that suicide alone will put out the pain? You question: “How could he believe his life was beyond repair, that he should ‘end it all’ rather than trust that God will provide? It’s inconceivable he could feel this way!” But there’s a difference between despairing of God and His grace and despairing of life. To despair of life is to give up on life. Life’s blessings you deem are irretrievable. There is no hope of living a rewarding life. To despair of God’s grace, however, is to give up on Christ and His forgiveness. You deduce: “What I’ve done is too terrible! I cannot be forgiven!” Despairing of God’s grace, in the end, consists of refusing to believe the Gospel.

Some families, following a suicide, fear the worst; that their loved one despaired of God’s grace. He concluded that help would never come. God was gone! In truth, he didn’t give up on Christ and the forgiveness of sins. He wasn’t lacking faith in the Gospel. He lacked hope in this life. His despair was created by severe depression or, in some cases, delusional thinking.

To be sure, the one who despairs of life is not trusting as he should. However, God saves by grace despite one’s struggles with unbelief. He places us in a state of grace through Holy Baptism and our hearing of the Gospel. Here God pledges to keep us in the faith. He will save us despite ourselves, and our proneness to sin. “But where sin increased, grace abounded all the more” Paul declares (Romans 5:20). Granted, the one who makes a conscious choice to reject Christ and His forgiveness forfeits God’s grace. With regard to most suicides, however, hopelessness is the culprit, a hopelessness caused by depression or another form of mental illness. It’s not that the Christian is rejecting God. In his weakness he has rejected the life God has given him. Yes. He’s committed a very costly sin—but not an unforgivable sin.

Speaking with the Hopeless (Inconceivable Thoughts)
How do you help someone preoccupied with ending his life? Begin by listening. Listen to learn what is behind his despair. This way you may assure him you want to understand and help. When you do speak, keep the proper balance. Give him the Law and the Gospel. Many are reluctant to share the Gospel with those who are despairing. It’s believed: “If I tell him he’s forgiven of his thoughts about suicide, he may go through with his plan!” Regrettably, the alternative is to threaten him with hell, which may merely reinforce his suicidal thinking. He may determine he’s a horrible person for thinking such thoughts.

Words of Law may be spoken to the hopeless, but keep it simple. “What are you thinking right now? What is God thinking about this? Will your family really be better off? Do you agree this is wrong?” Even if he listens, however, no words of warning will end suicidal thinking. The Law ought never serve as the last word. The Gospel may be his only hope. Talk about his pain. Assure him that it’s a pain understood by Christ. Then remind and reassure him that faith is God’s gift which He gives through His Word, and no illness can deprive him of God’s gift. In the words of the apostle: “Who shall separate us from the love of Christ? Shall trouble or hardship or persecution or famine or nakedness or danger or sword? … No in all these things we are more than conquerors through him who loved us” (Romans 8:35-37 NIV). Next, relate to him a simple truth: Major depression does not reflect a minimal faith. It is merely symptomatic of the fact that each of us is conceived in sin. Finally tell him, “what you see isn’t necessarily what God sees. You may think you’re a hopeless failure. God says you’re a redeemed sinner.”

Even if you are able to encourage him in his faith, keep in mind that you may not succeed in altering his mood or his thoughts. Even the most qualified professionals may have little success in this regard. If you sense he’s a danger to himself, it is time he be hospitalized. 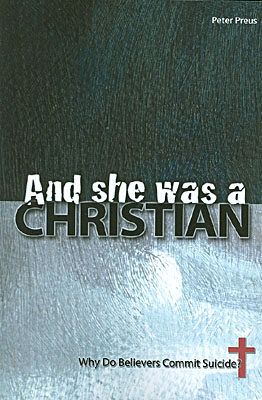 Suicide’s stigma is reduced when, in addition to being educated regarding depression and mental illness, people review the basics of the Christian faith. God in His grace rescues sinners from the consequences of sin. Being convinced of this, I’m no longer reluctant to tell people my wife committed suicide. If there is not time to visit about her struggles, I often say she died of suicide, resulting from depression.

(Pastor Preus is author of And She Was a Christian – Why Do Believers Commit Suicide? available at www.nph.net.)