One Word of Truth 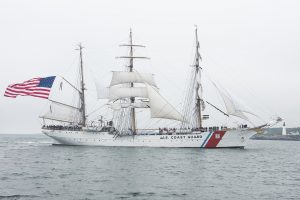 I held a lethal weapon in my hands for the first time in March, 1969. The firing range at Coast Guard Boot Camp in Cape May, New Jersey faced out to sea. I was firing my M-1 rifle at the target. And I was thrilled. I was hitting a bull’s eye almost every time I pressed the trigger.

Then, THWACK! I felt the sharp rap of our company commander’s swagger stick coming down on the barrel of my M-1. I stopped shooting and looked at his angry face.

The Chief, as we knew him, roared at me over the din. “Cease fahr! Cease fahr! G-d—it. When ah say cease fahr ah mean it!”

I was puzzled. Boatswain Mate Chief Clarence Ward Hollowell was a North Carolinian who brooked no opposition.

“Don’t you see that little white triangle out they-uh? That could be a sailboat. There could be pee-pul in that boat. We don’ take a chance with yooman laff. We’re the Coast Guard. We’re the Laffsavuhs.”

The small white triangle had to be ten miles off shore. All nautical charts clearly marked our firing range as “LIVE FIRE—stay away.” And marine radio channels offered repeated warnings to all boats approaching the Boot Camp. Even so, Chief Hollowell’s rage was unabated.

Only after the little white triangle disappeared over the horizon did Chief Hollowell order us to resume firing. I was so happy to score Expert Rifle and earn my ribbon.

I often return to that life incident. Human Life. We are the Coast Guard. The Lifesavers. We don’t take a chance.

Four years after Cape May, I was working with the Coast Guard in Washington, D.C. when the U.S. Supreme Court handed down its ruling in Roe v. Wade. I remember that day—dreary, gray, cold.

The newspaper headlines blared the news of former President Lyndon B. Johnson’s death. Only beneath the fold did I read about the Court’s overturning of all state homicide laws relating to unborn children.

Wait! Justice Harry Blackmun’s majority opinion said: We cannot know when human life begins. And, therefore, we can authorize violence against the being in the womb.

We cannot know? Of course, we cannot not know. Everyone who has taken a high school biology course—as I had—knows when human life begins.

The American Medical Association certainly knew when human life begins. Their discovery of conception and embryonic development had led the AMA to lobby for more protective laws on abortion throughout the U.S. And that began in the 1850s.

The older rule of morality was that one invoked by my Boatswain Mate Chief Hollowell. Take no chances if it’s human life. Or if it may be human life.

That it is human life is incontrovertible. As TIME magazine columnist Joe Klein put it in 2012: “Ultrasound has made it impossible to deny that that thing in the womb is a human being.”

Impossible to deny? There are U.S. administrations, political parties, campaigns, donors, and thousands of activists who base their entire lives on what is impossible to deny. 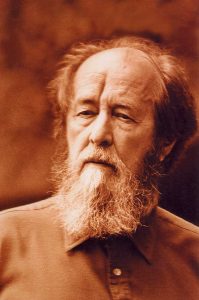 I was not a Christian believer when I went through Coast Guard Boot Camp. Nor, yet, when Roe v. Wade was handed down as I worked in Washington, D.C. But I had read the works of Aleksandr Solzhenitsyn.

My Coast Guard shipmates saw me constantly carrying a paperback versions of One Day in the Life of Ivan Denisovich, First Circle, or Cancer Ward. They quizzed me: What can you possibly find of such interest in a Russian writer?

I told them of one line that struck me: One word of Truth can Move the World. Solzhenitsyn often quoted that Russian aphorism. He believed that. He convinced me that it was true. And I still believe that.

Contributor Robert Morrison served in the Coast Guard and the Reagan administration. He says that he was led to faith in Christ reading the works of Solzhenitsyn.