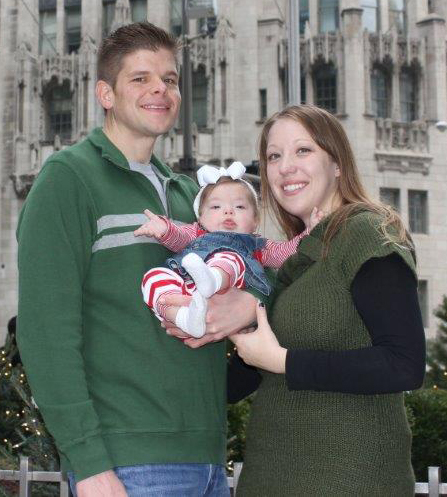 Why should the church speak up for life? Let’s have Liz and Patrick tell their story:

Patrick and I were very excited about welcoming our first child …  The pregnancy was going along well until I had a quad screen when I was 18 weeks along. I didn’t realize it was an optional test, or I probably wouldn’t have done it, but in retrospect, God was preparing me. The test came back indicating that something was wrong with the baby, either a chromosomal problem or a neural tube defect. Of course, Patrick and I were very upset and concerned. The doctors suggested we do some additional testing, but we felt that not only was the risk very small—only two percent—and we would not do anything different about the pregnancy. The delivery was easy, but as soon as Madylin was born, there was silence. It was only a couple seconds, but felt like 10 minutes. I knew immediately that something was wrong. I asked my mom “Is the baby ok?” And the doctor said, “We think she has Down syndrome.” As soon as I saw Mady, I knew. Even though we had been a little prepared for this, Patrick and I were still shocked.

Why did we refuse further testing? After all, 90 percent of children with Down syndrome are aborted—but I never believed in abortion. My parents raised me in the church and in a Christian school. I never understood how anyone could create life and then take it away. Every child is a gift from God. He creates every child with a plan and Patrick and I are part of God’s plan for Mady.

As soon as I held her in the hospital, I didn’t care that Mady had Downs. It was the same with everyone in our families. Patrick and I had already loved her throughout the pregnancy. We had heard her heartbeat and I felt her kick.

People don’t know what to say when they see Mady. They say stuff like, “Mady is so lucky to have you as parents.” But Patrick and I are the lucky ones to have Mady. I know some parents of special needs children wish they had made another decision. I have thought about if I could, would I take away Mady’s Down syndrome? But that would change her, she wouldn’t be Mady anymore and we love her the way she is. Mady is an amazing baby already. We call it the Mady Affect. She makes everyone happy, she is so content.

I know that Mady will struggle and Patrick and I will struggle as well, but we know we can make it. We have great support systems in our families and our church and we know that God will provide. God chose us to be Mady’s parents because He knew we would love her so very much.

Patrick and Liz made a decision that many people look at as being foolish and irresponsible. But they listened to God rather than a culture that places no value on people who are different. Their courage shines like a beacon of hope to other hurting families who need to hear that God loves them even through difficult times.

Why should the Church speak out for life? Because people in the Church are not immune to the problems of life and it is the obligation of the Church to equip them through the Word of God to make God-pleasing decisions. The reality is if the Church fails to speak, it leaves its people vulnerable to the siren song of personal autonomy that says “think about yourself …you can do whatever you want.” But Christians know differently. We are not our own, we were bought with a price! (1 Corinthians 6:19-20)

So where will the story of Liz, Patrick, and Mady go from here? Only God knows. But He does have plans for them. Plans that will make a difference not only in their lives, but in the lives of the people they will come in contact with. God works through the weak and humble, this young family will be a blessing to many. They are true heroes.