by Lynette Auch, President of Lutherans For Life

I never cease to be amazed at the whole procreation process. Every human life starts as an invisible—to the naked eye—process, and every minute detail is carefully orchestrated. One little glitch in the development process (e.g. Trisomy 21/Down syndrome), or a traumatic event occurring during the labor and delivery process, can lead to life-long struggles. With all that can happen during a pregnancy, labor, and delivery of a child, only our Designer and Creator God could possibly see it through safely.

An obstetric unit—my area of nursing expertise—can be like an emergency room, as one never knows what emergent problem may arise during a woman’s pregnancy. There is not a shift where I do not say a silent prayer for God’s presence, guidance, courage, wisdom, strength, discernment, and compassion to help me in my service to the patients in my charge. I also pray for the opportunity to demonstrate the love of Jesus to anyone whose life I may touch. I admit, I am not always the Christian example that I want to be, as people and circumstances can be very challenging. One thing is for sure, every day provides a new story or adventure to live through, observe, and learn from as I try to care for God’s precious, created human lives.

One of those emergent times took place when I cared for a woman going through the normal process of labor. She was nearing delivery time, when suddenly the baby’s heart rate fell well below the average normal of 110-150 beats per minute. All efforts to return the baby’s heart rate to normal parameters failed, resulting in an emergency cesarean section to deliver the obviously distressed baby. The obstetrician soon found the reason as he skillfully cut into the mother’s abdomen: the woman’s uterus had mysteriously ruptured, shaking the unborn baby’s world by cutting off its blood and oxygen supply, endangering both baby’s and mother’s life. With skilled medical teamwork, the limp, lifeless baby was resuscitated and finally breathing on its own. Meanwhile, the obstetricians spent several hours trying to sew the mother’s ruptured uterus back together. Despite the obstetricians’ valiant efforts to preserve her uterus and stop the massive bleeding, administering numerous units of blood products and medications to stop the bleeding, the woman needed a hysterectomy to save her life.

Another one of those emergent times occurred when Blaine Liebnow was born four and a half months premature on August 13, 1989, weighing one pound, three ounces and diagnosed with spastic cerebral palsy due to a lack of oxygen to his brain at birth. Blaine’s family knew he would be born disabled, but the doctor’s offer of abortion was not an option for them, for which Blaine is eternally grateful.

Blaine spent most of his childhood going to speech therapy and going through surgeries and physical therapy. Despite these efforts, he requires a wheelchair for mobility. But this has not stopped Blaine; he attended grade school and high school. As a sophomore, he was the Hugh O’Brian Youth Leadership representative, and, as a junior, was selected by his school to participate in the South Dakota Boys State civics program. He graduated from Wolsey-Wessington High School with honors, and then attended Dakota State University for a semester, but had to leave due to his physical needs. 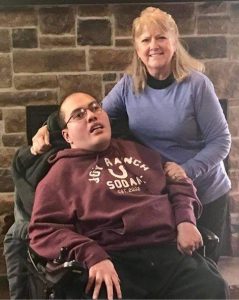 After being mostly housebound for the first portion of his life and being cared for by his mother and grandmother, who are now both deceased, Blaine now has his own apartment and his own life at Butler House, a Center For Independence of Huron, in Huron, South Dakota. Blaine is grateful for his aunt, Joyce, who is his advocate and emotional caregiver, who helps him with any problem he has.

Blaine spends his time doing a lot of volunteer work in disability awareness and recently applied and has been accepted by Concordia University Texas for online classes during the spring semester of 2021.

“On the contrary, the parts of the body that seem to be weaker are indispensable …” (1 Corinthians 12:22).

“For you created my inmost being; you knit me together in my mother’s womb … Your eyes saw my unformed body; all the days ordained for me were written in your book before one of them came to be” (Psalm 139:13-16).

And, just like Blaine’s life, every human life, no matter the size, level of development, environment, or degree of dependency, is indispensable in fulfilling God’s plans.

“‘For I know the plans I have for you,’ declares the Lord, ‘plans to prosper you and not to harm you, plans to give you hope and a future’” (Jeremiah 29:11).

Blaine is grateful to be alive and states, “I hope one day God will give me the opportunity to write something that will bring glory to Him. To all who may be reading this, I wish you a blessed day in our Lord Jesus Christ.”

(Blaine’s autobiography first appeared in the South Dakota insert of the October 2020 Lutheran Witness. It was revised and used with Blaine’s permission.)