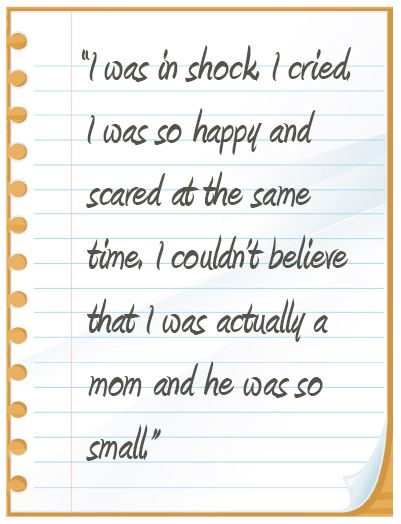 I have never met Paul and Jenn. But their story, featured on the front page of my hometown paper, caught my attention. The way I see it, Paul and Jenn have been living with dying.

In July, Jenn gave birth to Logan. He was two months premature. Jenn called her son a miracle who literally “fit in the palm of my boyfriend’s hand.” I want to talk about her boyfriend Paul’s hand but, first, we need to understand this “miracle.”

In a way, and right up to Logan’s birth, Jenn was living with dying. She is a young woman with Crohn’s disease who was told she would never become pregnant. In October of 2011, Jenn had an ileostomy. In November, she had it reversed. Early in 2012, she learned she was pregnant. The prenatal specialist told Jenn at her 20-week checkup that she should “terminate [the] pregnancy.”

There was “something wrong” with her baby’s brain. There was “evidence of a hole in his heart.” He was not growing correctly. Jenn was told that her baby “wasn’t getting enough blood flow.” He was suffering from intrauterine growth restriction. What was Jenn’s reaction? “His heart was always strong,” she said, “and I never lost hope.”

Worried about a chromosomal mutation or a genetic deformity, the doctors performed an amniocentesis at 24 weeks. There were no signs of a birth defect; nevertheless, the doctors told her there would be no chance of survival. It was explained to Jenn that her baby wasn’t growing because she had a full placental abruption. The placenta was not attached to the uterus.

Jenn had planned on giving birth at our local hospital but, on July 20, she woke up in a pool of blood. “I didn’t really want to go all the way to Des Moines, but Paul’s mom … insisted I go.” Doctors explained to Jenn that she had two choices: let the contractions take their course or risk a C-section. She chose a C-section when Logan’s heart rate dipped. There was a ten percent chance that he would survive.

Logan was born at 29 weeks, 2 days gestation. He weighed 15 ounces. “I didn’t know what to think or if he was OK—I didn’t really get to see him until the next day. I was in shock. I cried. I was so happy and scared at the same time. I couldn’t believe that I was actually a mom and he was so small.”

On his two-month birthday, Logan weighed almost three pounds. Jenn explained to the reporter, “There is absolutely nothing wrong with his brain or heart.” He is small, but “perfectly healthy.” Doctors told Jenn there is a higher risk of cerebral palsy, but Logan has good muscle activity. Jenn is a mother with hope. And, for good reason.

Her boyfriend, Paul, has a six-year-old son who was also born premature at 29 weeks and four days. He was three pounds at birth. Today, in Jenn’s words, this little boy is “tall, healthy, and fine—he’s perfectly fine.” By the time you read this (and God-willing), Paul and Jenn will have brought Logan home from the Neonatal Intensive Care Unit to meet his half-brother.

My pro-life eyes help me see that Jenn has been living with dying for quite some time. I’ve never heard Chrohn’s disease described as “fatal,” but I know people who have it and how much they suffer. Perhaps, at times, it might feel a little bit like dying. But, with life and breath in them, these people persevere. Perhaps, in the face of adversity, they treasure life even more.

Jenn lives with her own poor health, but let me tell you what pierces deep to my pro-life soul. Every day of Logan’s life in her womb, Jenn lived with the possibility of his death. She was told to abort him. When she dared not, she was told her son’s life was incompatible with life. Logan’s mom persisted in hope.

I am a stranger to Jenn and her boyfriend, Paul. Yet, at the same time, I am their neighbor. Though they may never read this, I offer a plea—an encouragement—for the sake of their son.

Jenn and Paul, in spite of adversity, you have stayed the course for life.

Paul, I’m guessing that some voices hinted your girlfriend might be “crazy,” but you defended her sense of motherhood. When voices cried, “You’ve been through this before, why would you do it again,” you stayed the course and lived in the face of dying.

Will you go the distance, Paul and Jenn? Will you please consider another act of courage? In a time when marriage is being rejected and children are paying the price, will you dare to build a better foundation for your “miracle?” Will you show Logan how much his life matters? Whatever your reasons for not marrying might be, will you consider the benefits for Logan of having a mommy and daddy who have committed themselves—hard work as it is—to the faithfulness of marriage?

I was captivated, Paul, by the front page newspaper photo of you holding your 15 ounce son “in the palm of your hand.” That’s what a father does. He holds the miracle of life very tenderly in his loving care. A father gives both his child and his child’s mother the covering of his name. I speak from experience because both my Heavenly and earthly fathers have called me by their name. The covering of that name bestows great value on my life.

Will you, Paul and Jenn, join with God in bestowing great value on Logan’s life “in sickness and health ‘til death do you part?”