The Annunciation and Abortion 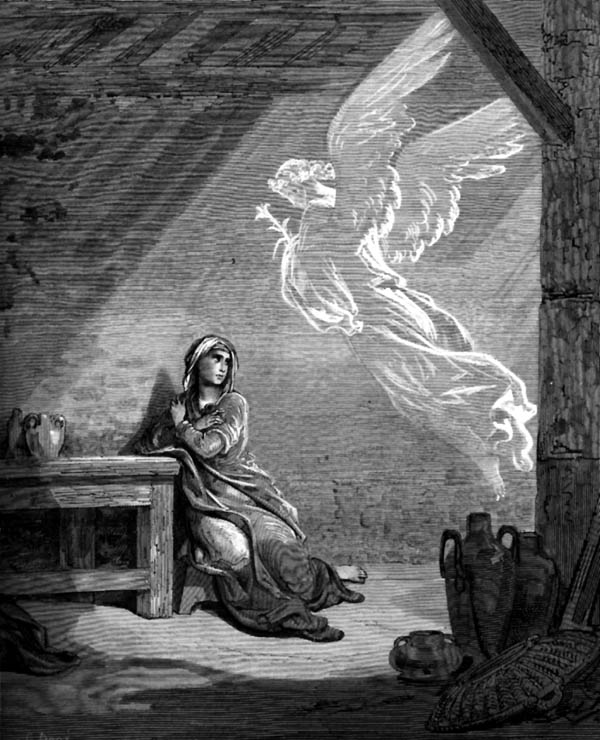 Some have argued that there are no Biblical references to prove that life begins at conception. But a quick Scriptural journey to Nazareth and the hill country of Judea shows otherwise–for here we encounter the Annunciation and Visitation accounts that give us a powerful portrait of the sanctity of human life in the womb.

When considering the Incarnation (the Son of God coming in the flesh) of Jesus Christ, many think immediately of the nativity in Bethlehem. But the Church of the Annunciation in Nazareth has a plaque that states: “The Word was made flesh here.” It is at Nazareth, not Bethlehem, where God the Son became true man without ceasing to be true God.

The Witness of the Annunciation
We can focus more specifically than even Nazareth as to the place and very moment when the Incarnation occurred. Luke’s Gospel records the response of Jesus’ mother to the angel’s announcement (“Annunciation”) that she had been chosen to bear the Savior of the world: “May it be to me as you have said” (1:38). Before this moment of His conception God the Son was not yet man; but from this moment onward He was man. Contemplating the wonder and mystery of this encounter, St. Ephraim (306-373 A.D.) wrote: “He (Jesus) entered the womb through her ear.” The Apostle John in the majestic first chapter of his Gospel describes what happened this way: “The Word became flesh and made His dwelling among us” (1:14). Jesus’ first dwelling was not Bethlehem or Nazareth, but the womb of a young virgin named Mary. This truth has long been recognized by the Church and holds a timely message for the 21st century Christian who accepts the pagan notion of aborticide.

The Council of Chalcedon (451 A.D.) reaffirmed the Church’s consistent witness to the sanctity of unborn human life when it stated: “We confess the Holy Virgin to be Mother of God because God the Word was made flesh and became man from the very moment of conception.” In his book, Redeemer in the Womb, author John Saward writes, “the Incarnation was effected in Nazareth but manifested in Bethlehem. The adventure of being human began for the eternal Son at the moment of His conception.” Lutheran Christians have long affirmed this truth. “But Christ did not receive His majesty . . . only after His resurrection . . . but when He was conceived in His mother’s womb and became man and when the divine and human nature were united” (Solid Declaration). The Formula of Concord states, “we believe that the Son of man according to His human nature is really exalted to the right hand of God because He was assumed into God when He was conceived by the Holy Spirit in His mother’s womb and His human nature was personally united with the Son of the Most High” (Epitome, p. 15, Art. 8, Tappert p. 488).

The Witness of the Visitation
John Saward’s assertion that Jesus’ Incarnation was manifested in Bethlehem when He was born is well taken. The image of the Baby in the manger is powerful! But there is an earlier, impressive manifestation of the Lord while yet unborn. Long before the Wise Men adored Him, the unborn John the Baptist, in his sixth month of life, greeted the Savior by leaping for joy in Elizabeth’s womb! We know this from the Gospel of Luke (1:39), which suggests that Mary went immediately to visit her cousin Elizabeth after the angel Gabriel’s visit. This would mean that the unborn Jesus whom both Elizabeth and John greet was smaller than the point of a needle!

The Witness of the Holy Spirit
Some still wish to maintain the fiction that “we really don’t know when life begins” or that our “beingness” occurs at some later stage of development. St. Ephraim (306-373 A.D.) was among many Christians who demolished this pretension centuries ago: “If man is essentially a whole, then he must be a whole from the beginning: the genesis of body and soul must be simultaneous. This soul is related to that body; that body in relation to that soul. Each must, therefore, belong to the other from the outset.”

Who can deny that from the moment of conception the Second Person of the Holy Trinity was both fully divine and fully human? The coexistent, coeternal Son of God did not exist “in limbo” in Mary’s womb, becoming either a divine or human person at some later point in gestational development, as some heretics have taught through the ages. When the Son of God took up temporary residence in Mary’s womb, the real divine nature and human personhood of Jesus was confirmed by Elizabeth’s Spirit-inspired greeting when she called Mary the “mother of my Lord” (Luke 1:43). Elizabeth spoke these words “filled with the Holy Spirit” (Luke 1:41) who does not lie. Similarly, the unborn Baptist’s leap was inspired by the Holy Spirit, signifying the approach of the King of Kings though He was yet a tiny embryo. We dare not dismiss the import of this encounter, for the Spirit of God teaches us profound truths about the beginning of human life.

One truth is that the Holy One of God, in sanctifying the womb of Mary (“blessed is the child you will bear”), sanctifies the wombs of all women and bestows an innate value on all unborn children. If we acknowledge that the unborn Jesus was deserving of respect and protection because He was known by the Father and fully human from the moment of His conception—should we not also acknowledge the same of all unborn children regardless of age or condition? Are we not all conceived body and soul, created and known by God, and objects of His providential love from the moment of our conception?

The Witness of the Church
Because the Church has always understood these truths, it has had a high regard for human life from the moment of conception. Little wonder, then, that the Church has condemned the pagan practice of abortion from the earliest days. In the latter part of the First Century a collection of Church teachings called the Didache placed those who are “killers of the child, who abort the mold of God” between murderers and adulterers, for all were embarked upon “the Way of Darkness.”

Around 175 A.D. Minicus Felix, a Roman lawyer and Christian apologist, refuted scandalous claims that Christians were involved in the ritual sacrifice of infants:

“And now I want to turn to the man who asserts or believes that we are initiated by murder and the blood of a little child. Can you think it possible that such a tender, tiny body should be gashed with mortal wounds, that any man alive would slaughter a little baby hardly come into being, to spill, drain, and drink its innocent blood? Nobody can believe such a thing unless he is capable of doing it himself. But I do see people among you (the heathen) at times expose newly born children to wild beasts and birds and at other times put them to death by strangling or other horrible means. Some women destroy the unborn child in their womb by taking drugs, thus committing infanticide before they are delivered. To us it is not even permissible to see or hear of murder!”

Several times Martin Luther spoke of the humanity of the unborn child, condemning abortion. Commenting on Genesis 49:33, he wrote:

“For no one of those who are alive now can know where he was during the first two years when he lived either in the womb, or when after being brought into the world, he sucked his mother’s milk. He knows nothing about how the days, the nights or the times have been, nor who ruled and had waited for him. And still he lived at that time and he was a body joined together with a soul and he was equipped for all natural functions. Therefore this is a most certain argument and proof that God wants to preserve humanity in a wonderful manner that is completely unknown to humanity.”

The birth canal does not magically transform human-shaped entities into real human beings. As we have seen, the witness of the Annunciation and the Visitation provides compelling reasons for respecting and protecting unborn human life.

Early Christians chose March 25 as the day to celebrate the Annunciation—a date that comes nine months before the birth date of our Lord. The Church would do well to pay more attention to this traditional observance in an age when unborn human beings are legally destroyed throughout all nine months of pregnancy for any reason. That the Son of God entered the world as we do—through the womb—should cause awe in all and fear in those who would presume to invade this sanctuary with instruments of destruction.