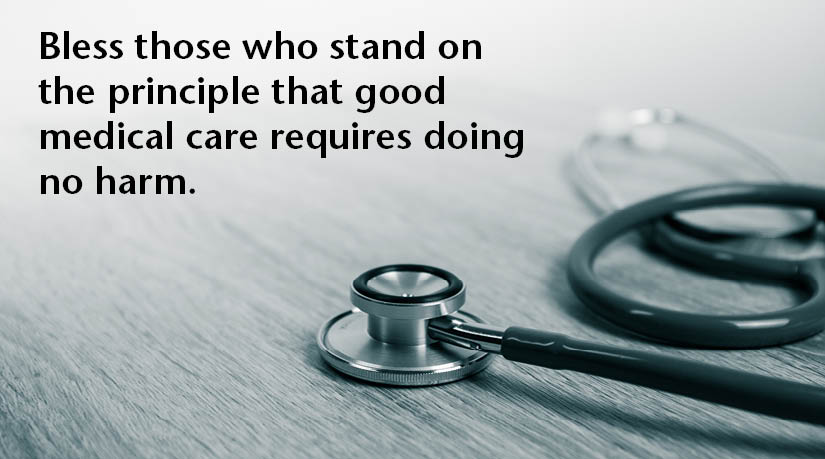 If you are like me, you probably have always taken for granted that those who care for you in the medical profession always have your best interest in mind. After all, doctors have taken an oath to do no harm, and nurses have played a key role in caring for patients throughout life’s continuum.

I am not a medical professional. I speak from a layperson’s perspective. My bubble burst when I heard that many medical schools no longer require doctors to take the Hippocratic Oath to do no harm. Does that mean it’s now okay to do harm? It became an issue when states began to legalize assisted suicide. Doctors prescribing lethal doses of medication to cause death would be defying that precious oath. So, it’s been removed or watered down. Fortunately, we still have some schools offering it and doctors that do take the oath on their own as many still believe it is the right thing to do in their profession. Bless those who stand on the principle that good medical care requires doing no harm.

Until recently, major medical organizations have been very clear in their position statements about their opposition to assisted suicide and euthanasia. Now, both the American Medical Association (AMA) and the American Nurses Association (ANA) are looking at the possibility of changing their opposition statement to being neutral on this topic. This means they will let a patient do as they please rather than suggesting treatment that would not include killing themselves. If they enact this change rather than providing treatment for end-of-life issues, they will either support assisted suicide or euthanasia, recommend someone else to handle it, or step aside if a patient asks for it. In my opinion, recommending another doctor or nurse who will enact assisted suicide or euthanasia is the same as participating in it.

Once medical providers stop doing what is right in the care and treatment of their patients and succumb to pressures that support letting people kill themselves, whom do we trust? Ending someone’s life is not a medical treatment. I think it’s a good idea to talk with your personal physician about his/her view on assisted suicide so you know if you face end-of-life medical issues, then your medical provider will be there to help you through it until you reach a natural death. It is also more important now than ever that you have a medical directive that provides a power of attorney for healthcare to someone who shares your life-affirming beliefs so he or she can speak on your behalf when you cannot speak for yourself.

I recently had the opportunity to meet with several Christian nurses, and I asked their opinions on this topic, as we knew the American Nurses Association (ANA) was getting lots of input on their review of their position statement. These nurses had some strong opinions on why the position needs to remain in opposition to assisted suicide and euthanasia. One of them said something that I think went right to the point. She said that it is important that nurses give their patients the care they need rather than what they want, as what they want isn’t always in their best medical interest. She added that the people in their care are not customers or clients—they are patients. Once they become customers rather than patients, the nurse becomes a technician rather than a healer.

Here is what the current ANA position statement says:

The American Nurses Association (ANA) prohibits nurses’ participation in assisted suicide and euthanasia because these acts are in direct violation of Code of Ethics for Nurses with Interpretive Statements (ANA, 2001; herein referred to as The Code), the ethical traditions and goals of the profession, and its covenant with society. Nurses have an obligation to provide humane, comprehensive, and compassionate care that respects the rights of patients but upholds the standards of the profession in the presence of chronic, debilitating illness and at end-of-life.

Changing these words would be shameful as they speak clearly about an honorable profession that has been held in the highest esteem for many years. Although not all doctors and nurses belong to these professional associations, most people think they do, and, thus, they have a lot of influence in society. Changing their position statements to being neutral will send a message that they condone assisted suicide and euthanasia or don’t care enough about their patients to protect them.

I am extremely thankful for the many doctors and nurses who stand firm in their opposition to assisted suicide and euthanasia, although they are finding themselves being pressured to change their position. Please pray they remain firm in their For Life stance. May we also pray that those leading these powerful organizations would stand on the principles of their professions and keep their opposition position. May they boldly stand in opposition to assisted suicide and euthanasia and provide the needed leadership to maintain the ethical standards their professions were created to provide to society and that the Gospel clearly proclaims.