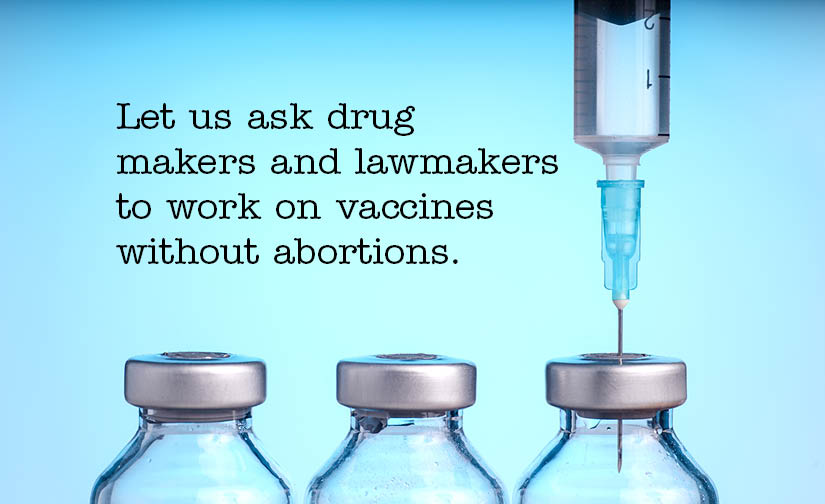 Of course I had all three of my children vaccinated. Immunizations can prevent deadly diseases. These near-miracles have all but eradicated past threats like smallpox and polio. I got all my inoculations as a kid. Schools need a record of them. We followed the whole schedule our pediatrician recommended. But we would have proceeded differently if we had known that some vaccines contain tissue from aborted babies.

Vaccines target viruses. Viruses aren’t alive like other germs. They only work by attaching to another organism. They hijack a cell’s machinery and manufacture themselves by the millions. The organism’s immune system must dispatch antibodies to dissolve the virus particles. When viruses fabricate faster than antibodies, they can interfere with vital functions. Vaccines use deactivated virus particles. They prompt our insides to make the right antibodies before we face the real infection. That way when we do get exposed, we can take out the pests fast.

Where do we get enough viruses to make the vaccines? Viruses can’t grow without living tissue. Sometimes they have no effect on animal cells. Adult human cells might have defects or bring along other microbes. It seems wrong to infect any child on purpose, even when endangering the one could save many. So, scientists in the 1960s took tissue from aborted babies to develop many vaccines. Some records hint that the deaths took place just for the studies. Drug companies have kept these specimens, called cell lines, alive in their labs ever since. They continue using them to form vaccines today.

They called the first cell line WI-38. She never got to have a name. A doctor in Sweden took her from her mother at fourteen weeks in July 1962. The abortion was elective and did not take place for any medical reason. Her lung cells were harvested less than five minutes after her death. The number 38 stands for the thirty-eighth trial. The thirty-seven prior failures drew on twenty-one other aborted babies. They have used WI-38 to prepare vaccines for adenovirus (acute respiratory illness)1, chickenpox2, measles2,3, mumps2,3, rubella2,3, and shingles2. (It took sixty-seven more abortions to collect the rubella virus itself.) The other main cell line goes by MRC-5. He died by an abortion done in the U.K. during September 1966. His lung tissue has made vaccines for chickenpox2,3, hepatitis A2,3,4, hepatitis B3,4, typhoid4, measles, mumps, rubella, polio3,4, diphtheria-tetanus-acellular pertussis3,4, shingles, and smallpox5.

Like all cells, these cultures break down as they get old. They don’t last forever. Researchers feel they must turn out more cell lines. Their firms like the funds they bring in, too. They put to death a Dutch baby girl at sixteen weeks in 1972 for HEK-293 (293!). (You can buy a sample to experiment on for $289.) In the early 1990s another sixteen-week Dutch girl (and some eighty others) died for IMR-90. PER.C6 came from a little one of eighteen weeks in 1985, but the reports don’t even recall the sex. Scientists in China ended a twelve-week female’s life (and nine more) to get walvax-2 in 2015. These dear children now have become just human diploid cell strains (HDCSs). Our race slayed them so that we could test new vaccines for Ebola, HIV, malaria, and influenza.

Vaccines save lives. They wipe out grave illnesses. Our Lord Himself gives us health this way for Jesus’ sake. But vaccines also come with dark sides. They have involved and encouraged abortions. They cause side effects, some of them quite serious. They can pass on other pathogens, like carcinogenic cells, since they carry some DNA from the host cells. When laws force folks to get vaccines, it can violate our conscience or religious freedoms. Certain ailments that vaccines treat only pose minor risks. The vaccine labels (who reads those?) and websites don’t hide the origins and ingredients. And most of us don’t think twice before having the shots done year in and year out. We just take the doctor’s word and let insurance pay for it.

Our Heavenly Father treasures all lives. He gives us even the feeblest human person as a blessing and a privilege. The Lord Jesus dwells with us to free us from sin and death so that no life gets lost. He deals in grace toward us when we have not known what we should. He forgives us for the times we did not care. We may go forth not bound by bad ways, and we can do good.

Not all vaccines use HDCSs from aborted babies. Those that do also have ethical versions that don’t come from fetal tissue (except for adenovirus, chickenpox, and MMR). Christians will want to make sure their doctors offer them. If they can’t get them, Christians may claim state religious exemptions from required immunizations. And let us ask drug makers and lawmakers to work on vaccines without abortions.

The website www.cogforlife.org tells all this and more about vaccines and abortions. (Notes: 1sold by Barr Labs, 2sold by Merck, 3sold by Glaxo-Smith-Kline, 4sold by Sanofi, 5sold by Acambis)