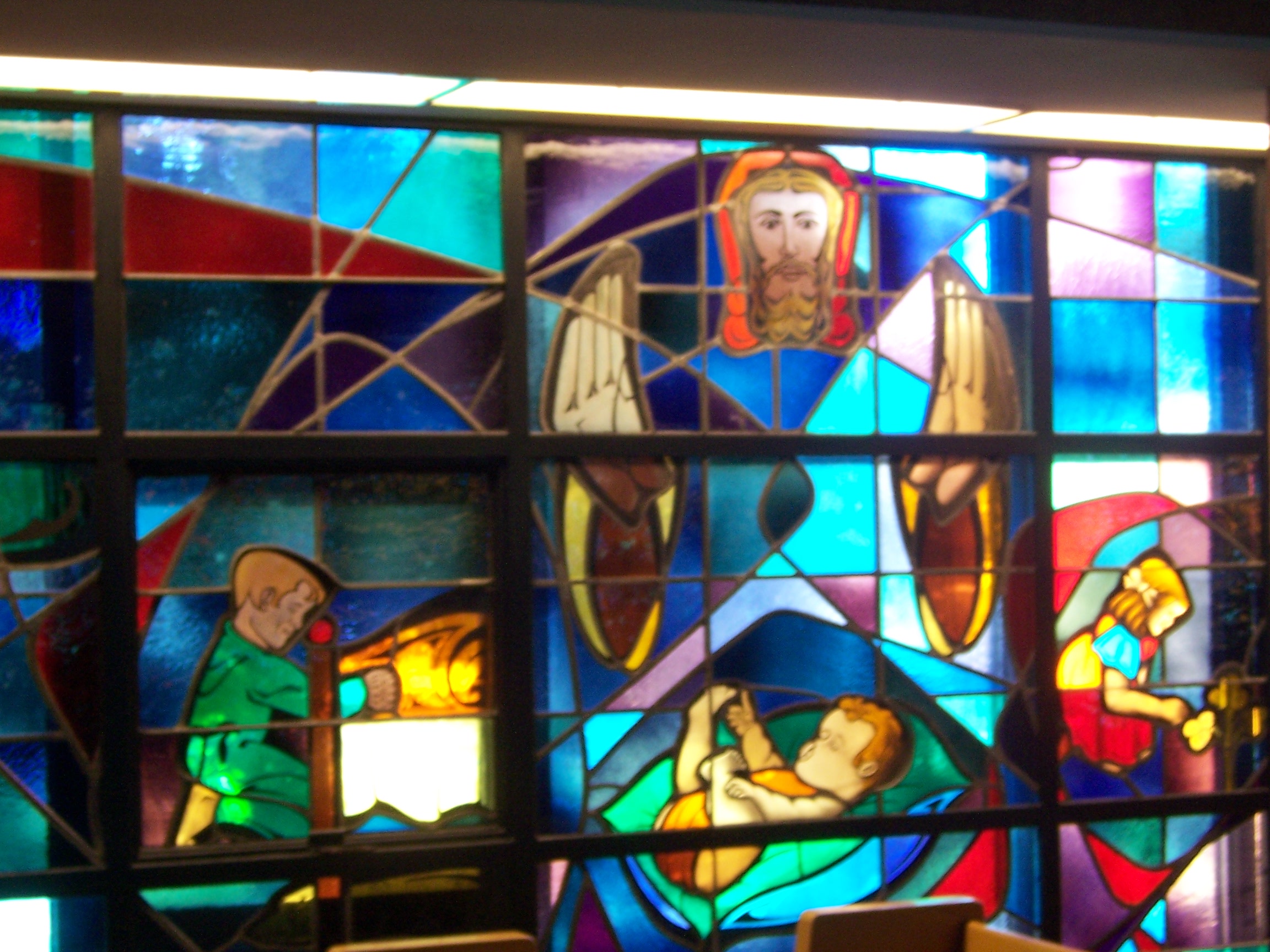 Hands communicate. They tell us so much about a person. A hand reaching down to help someone up says, “I’m on your side. I’m here to help.” A hand caressing another hand or a cheek tells someone, “I love you. I want to be close to you.” A hand beckoning someone to come near or waving “Hi,” lets you know, “You’re welcome here, come on in.” If you see someone’s hands moving rapidly while talking, you know the person is excited about something.

But hands can also communicate anger and hate. A hand made into a fist to hit someone is violence waiting to happen. A hand can slap someone to show how upset and angry the person might be. A hand can hold a weapon to threaten or kill. Or hands can be put up in defense in an effort to protect from those other hands that want to abuse or hurt.

The Bible uses that simple truth that hands tell us much about someone to tell us much about God. The whole of creation, all the universe, is said to be God’s handiwork, the work of His hands. God’s hands hold everything together. Without His almighty strength keeping the world going, we would immediately fall into chaos and destruction. So we sing “He’s got the whole world in His hands.” When God’s people were in slavery in Egypt, the plagues that convinced Pharaoh to let the Israelites go free are described as God’s strong hand and outstretched arm. God’s hand also describes His punishment for those who disobey Him. When you read of God’s hands in the Bible, you learn so much about God’s awesome power, His loving care, His almighty protection, His just punishments.

The same can be said of Jesus. He is God’s Son. He is fully divine, fully God. Whatever is said about God’s hands can be said about Jesus’ hands, and whatever Jesus does with His hands tells us so much about God. There’s awesome power—miracles are done with Jesus’ hands. Just a touch of His hand and the deaf hear, the lame walk, and the dead come back to life. Just punishment—the money changers are driven out of the temple, the demons are cast out and away, the Pharisees are sent packing with a wave of His hand. Then there’s loving care—children come to be blessed and Jesus reaches out His hand to pray for them. Jesus’ hands are powerful, just, and loving.

In fact, Jesus’ hands love and protect even those who can bring nothing in return. That is what is going on in that scene where Jesus blesses the children. Picture it. Parents were bringing children. We don’t know for sure how many, but the words used in the Gospels do indicate that the ages could have been from pre-teen down to infants. I even read that the child in the womb could be included in one of the words used for children in this scene.

But the disciples didn’t want the children to come to Jesus. It could be they didn’t want Him to be bothered by such insignificant little ones when important ministry needed to be done. The next section of Matthew says that a rich young man came to see Jesus. Perhaps they thought the rich and powerful needed to see Jesus, not a bunch of noisy children. Or it could be the disciples are like so many back then and saw children of little value since they weren’t big enough to work and make a contribution. They weren’t adults so they didn’t count yet. Kids didn’t matter so why should they take up precious time with Jesus.

Jesus would have none of that. He welcomes the children. Can’t you just imagine His hands? He waves off the disciples with a “Stop that.” Then He motions with His hand for the children to come to Him. Finally He reaches out His hands and blesses them. He prays for them.

I wish I knew what that prayer was. I wish I knew what words of blessing He spoke. We don’t. But His hands spoke volumes. They communicate Jesus’ welcome, love, care, protection, and blessing—and not just for children. Jesus’ compassionate touch and protective hands are for all people, regardless of size and importance in this world. In fact, He is especially compassionate and protective of those who are on the bottom of the social ladder—children, lepers, tax collectors, prostitutes, and sinners. He welcomes the helpless, the hurting, those most likely to be trampled, and those who can bring Him nothing in return. No one is too small or insignificant to be blessed by Jesus’ hands.

Yes, Jesus’ hands, God’s hands, tell us much about Him. But where are those hands today? The helpless, the hurting, the unimportant, the insignificant seem to be left so unprotected, so easily trampled by the rich and strong.

Take children. Yes, we try hard to protect and love our little ones in this society. Schools, clothes, Babies “R” Us stores, toys, baby food, child protection laws, tons of books on how to raise a child, and the list of efforts to protect children goes on. But we still read the headlines. A man shoots a baby with a pellet gun. A mother drowns her children. Child pornography is downloaded into computers, which means someone took the pictures to begin with. Kids bring guns to school and kill classmates. A man walks into an Amish school house and kills so many young children. Younger and younger children are being tried as adults. Children around the world die from hunger or suicide bombs. They are sold as slaves or into prostitution in many countries. You see the pictures on milk cartons or at stores of children that are missing—abducted or run away—too often never to be seen again.

The number of children not even born, lost through abortion is staggering. These are the littlest of people, the most helpless, often seen as the most insignificant and easily disposed of. The hands at work here do not carry guns but medical instruments—but death is still the result. Or consider the loss of life due to embryonic stem cell research using the youngest of people, just a few days old, but tiny children just the same, children that would have had hands and feet if they had been allowed to grow.

Too many children are not protected, not blessed, not loved. Where are Jesus’ hands of blessing???

At Grace Lutheran Chapel in Bellefontaine Neighbors, Missouri, one stained glass window has an eye-catching scene. [See picture above.] Jesus is standing over three children: a young boy praying, a baby playing on a pillow, and a young girl planting a flower. What stands out is the size of Jesus’ hands. They are huge, seemingly out of proportion to the rest of His body. They are raised in blessing. When we read those headlines and begin to wonder where the divine protection and loving care might be, this window is an excellent reminder that we need to first look for Jesus’ BIG hands of blessings right here in the Church, where He has promised to be, where He has promised to bless us.

In the Church I am reminded that His hands were raised, outstretched, in blessing on the strangest of places—a cross. His hands have nails through them. But those nails didn’t hold Him to the cross, love does. He could have used His mighty power to come down at any time. He could have used His hands to destroy the Romans, Pharisees, and anyone else who put Him there. But instead His hands go limp in death. He is treated as insignificant, of little value, trampled upon, and those hands on that cross tell us that everyone, no matter how unimportant or important, small or big, helpless or strong, has a Savior. He will free us from sin and doubt, anger and abuse, and anything done by hands to hurt even the littlest of His children. The cross is where I see Jesus’ hands of blessing.

And here at Church, where He has promised to be, I am reminded that His hands of blessing are alive again, risen from the dead. Doubting Thomas had the wonderful opportunity to reach out his hands and touch Jesus’ living and powerful hands the week after Jesus rose from the dead. What joy to know He’s alive and has power over all the violence and death caused by human hands! Jesus’ hands bring peace when we are so troubled by the headlines, bring hope when we are so troubled when the littlest of His creation are trampled upon. All because He is alive and now sitting at God’s right hand of power.

Incredible as it may sound; much like Thomas we, too, touch the risen Savior who brings us hope and peace in a world of violence and hurt. When? At the Lord’s table. Our hands take a piece of bread and hold a silver cup, and we have Christ in us to assure us that He still blesses us with His mighty power, loving care, and divine protection. He assures that one day, the last day, He will bring just punishment for those who use their hands in violence and abuse on the littlest ones of His creation.

How so? Well, He uses our hands to do His work of blessing. Jesus blesses us to go and be a blessing to others. Our hands become His hands in this world. Our hands communicate so much about the Savior we worship.

Remember Jesus blessing the children? He prayed for them. So also our hands can be folded together in prayer. We ask for God’s blessings on those who are so easily trampled upon. We ask the Holy Spirit to move and work in this world so that leaders and governments will protect and care for those who cannot fend for themselves.

And our hands go out to do His work of blessing in this world. Look at your hands. They are the hands of Christ. They are His big hands of blessing. What can they do? Write a check, vote, help, carry, care, show compassion, defend, or build (local pro-life efforts could be inserted here). I could go on—it’s a long list.

Consider this family. Three strong and vibrant children, but the fourth child is profoundly schizophrenic. The mental illness came when he was a teenager. He heard voices. He pulled a knife on family members. He tried to kill his mother. Medication has helped, but now he has the social skills of a child and can’t go out in public by himself. He’s 31 and lives in a government-sponsored house with people who have similar difficulties. Almost every weekend his parents pick him up and bring him home. They care for him and pray for him. They take him to church on Sunday morning. He is not forgotten; many hands reach out to him. The hands that paid the taxes for that house, and Christ’s hands at work in those parents and that church family.