Abortion and the Message of the Church – Sin or Salvation? 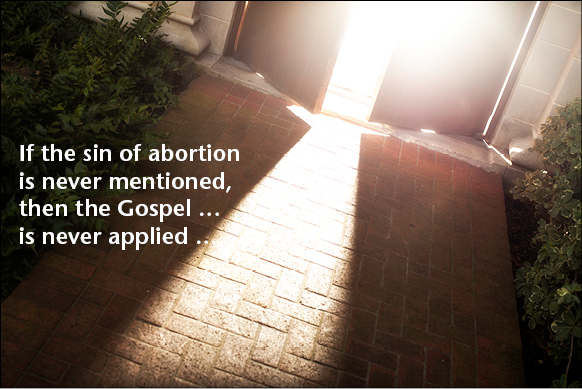 Order Abortion and the Message of the Church brochure at CPH

We will call her Sandy. When the pregnancy occurred, she felt she dare not talk to her parents who still considered her a “nice” girl. Her boyfriend insisted on an abortion. Convinced this was the only thing that could save her from a painful future, she consented.

Sandy writes: “I was wheeled into a small O. R., and right before the Valium was put into the IV, I asked the Lord to forgive me and take me to heaven if I died. You see, my spirit knew I was about to do something sinful, even if my mind denied it. My spirit knew I was committing a grievous sin.”

Was Sandy’s abortion her salvation from a difficult situation or a “grievous sin”? What is the message of the Church?

The Message in History 1

Orthodox scholar Alexander Webster writes, “It [abortion] is one of only several moral issues on which not one dissenting opinion has ever been expressed by the Church Fathers.”2  Webster includes Western writers from the time of the Apostolic Fathers up through those in the period of Gregory the Great and the Eastern Fathers during the entire Byzantine millennium (A.D. 330 to 1453). “Even a cursory reading of the patristic literature reveals a relentless campaign against the inhuman sin of abortion.” 3

The Didache commands, “Thou shalt not murder a child by abortion,” and then connects this with the second great command, “Love your neighbor as yourself.” 4

The split between East and West did not affect the ecclesiastical teaching on abortion. Both Rome and Constantinople warned against it. Unanimity was also seen following the split caused by the Protestant Reformation. Martin Luther: “For those who have no regard for pregnant women and who do not spare the tender fruit are murderers and infanticides.” 5 John Calvin concurred: “If it seems more horrible to kill a man in his own house than in a field, because a man’s house is his most secure place of refuge, it ought surely to be deemed more atrocious to destroy the unborn in the womb before it has come to the light.” 6

In the 20th century, noted leaders in the Church continued their admonition. Deitrich Bonhoeffer: “Destruction in the mother’s womb is a violation of the right to live which God has bestowed upon this nascent life. To raise the question whether we are here concerned already with a human being or not is merely to confuse the issue. The simple fact is that God certainly intended to create a human being and that this nascent human being has been deliberately deprived of his life. And that is nothing but murder.”7

Karl Barth: “The unborn child is from the very first a child. It is still developing and has no independent life. But it is a man and not a thing, nor a mere part of the mother’s body …. He who destroys germinating life kills a man … The fact that a definite NO must be the presupposition of further discussion cannot be contested, least of all today.”8

Helmut Thielicke: “The fetus has its own autonomous life, which, despite all its reciprocal relationship to the maternal organism, is more than a mere part of this organism and possesses a certain independence … These elementary biological facts should be sufficient to establish its status as a human being … This makes it clear that here it is not a question—as it is in the case of contraception—whether the proffered gift can be responsibly accepted, but rather whether an already bestowed gift can be spurned, whether one dares to brush aside the arm of God after this arm has already been outstretched.”9

The Message in God’s Word

Over the centuries the Church’s message has been clear. It is also clear that the message was derived from God’s Word, especially that Word relating to the doctrine of creation. If life is the work of God’s creating hands, then life has intrinsic value, and therefore, destroying life, including unborn life, is a sin against God.

In the beginning, God was the creator of life. “So God created man in his own image, in the image of God he created him; male and female he created them” (Genesis 1:27). “In the image of God” distinguishes this life from, and raises it above, all other life. Even though this image was lost in the Fall, human life maintains its value because of its original lofty position. “Whoever sheds the blood of man, by man shall his blood be shed, for God made man in his own image” (Genesis 9:6).

God’s creating hands are at work from the very beginning. “For you formed my inward parts; you knitted me together in my mother’s womb” (Psalm 139:13). “Thus says the Lord, your Redeemer, who formed you from the womb …” (Isaiah 44:24a). Therefore, because all life is from His hand, He abhors the shedding of innocent blood. “You shall not murder” (Exodus 20:13). He abhors the sacrifice of children.

“[T]hey poured out innocent blood, the blood of their sons and daughters, whom they sacrificed to the idols of Canaan, and the land was polluted with blood. Thus they became unclean by their acts, and played the whore in their deeds. Then the anger of the Lord was kindled against his people, and he abhorred his heritage” (Psalm 106:38-40).

The Message in the Church Today

Abortion is never a mere political issue. The destruction of God’s gift of life makes it a grave theological issue. Yet, the silence of the Church and its shepherds cries out that it is not. You may recall that God does not take kindly to those shepherds who “have healed the wound of my people lightly, saying, ‘Peace, peace,’ when there is no peace” (Jeremiah 6:14).

Failing to preach about abortion offends women more grievously than preaching about it. If the sin of abortion is never mentioned, then the Gospel—that Gospel pastors have been called to proclaim—is never applied to that sin nor to those caught up in the pain and guilt of an abortion. Instead, Satan whispers through the silence, “This sin is so awful, even Jesus can’t forgive you.” Surveys are showing more and more often that many women in abortion clinics really do not want to be there. Not all women see abortion as a choice but rather the result of feeling they have no choice. That’s the way it was for Sandy. She felt all she would get from her parents was condemnation. Her church was silent. She felt trapped and could only see one way out.  Consequently, Sandy, and so many like her, are coming away from abortion clinics with a deep sense of guilt and hopelessness. The Church has the message of forgiveness and hope that can bring healing.